Haslam said, “We’re sold out (classes are full for the new lab in the fall).  It’s not like we were out beating the bushes looking for students.  The demand is here.”  Before the new lab opens with full classes for the fall semester, students had to drive to other Roane State campuses for lab required classes. 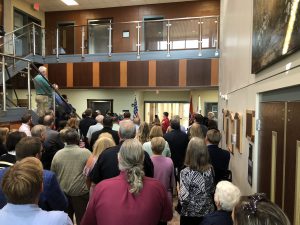 It was fitting that Roane State College’s “Student of the Year” Blake Ivey (red shirt) led the Pledge of Allegiance.

Ivey, a senior-to-be at Campbell County High School, is also a Middle College student at RSCC. He is a health profession major and plans to become a cardiologist.  The enthusiastic Ivey says, “The new lab fits right in with my goal, and I’ll be able to take my Biology classes right here at this Roane State campus.”

Businessman Ed Wheeler was recognized for his vision for the now 11-year old Campbell County facility as well as his generous donation and commitment.

The director of Roane State College Campbell County, Tracy Powers, addressed the full-house audience.  However, later in the ceremony, she was surprised by being recognized for her 21-years of service as the local director.

Representative Dennis Powers told the crowd that he first submitted the proposal for the science lab some four years ago.  Last year as he read the list of large schools like UT, ETSU, and TTU receiving millions and millions of dollars earmarked for campus projects, he soon saw Roane State College – Campbell County $1-million dollars.  He was thrilled to know that his persistence paid off.

The new lab was also a top priority for Senator Ken Yager who calls it a partnership that worked closely with several groups.  He noted that he worked closely with Dennis, the governor, and members of the community, and that it was that support that helped make it happen.

Roane State College President Chris Whaley, who is also a RSCC graduate, singled out Yager saying, “There’s no one person like Yager who fights as hard as he does for Roane State.” 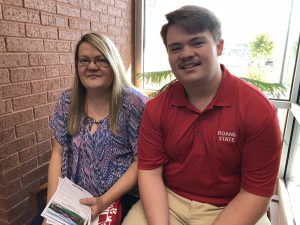 Ivey, who will graduate in May 2019 from CCHS and Roane State, expressed his great appreciation to Roane State and all those involved for helping him begin his career path right here at home. (WLAF NEWS PUBLISHED – 07/06/2018-6AM)