Armstrong Legacy Trio, Sparky and Rhonda Rucker, and Robinella headline the 12th annual Louie Bluie Music & Arts Festival on Saturday, Sept. 29, at Cove Lake State Park in Caryville, Tenn. Admission to the festival is free. However, donations will be accepted at the entrance gates and on the grounds to support the festival. 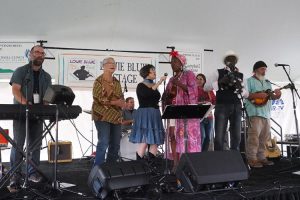 Festival information, including application forms for craft and food vendors, is available at LouieBluie.org. For information about the Campbell Culture Coalition, visit www.campbellculturecoalition.org.

Founded in honor of Campbell County’s musical heritage and Tennessee native Howard “Louie Bluie” Armstrong, who spent his childhood years in LaFollette, the Louie Bluie Festival is a showcase for a wide range of international musical styles.

“I think that’s how Howard would want it,” says Manuel Mesa, president of the Campbell Culture Coalition, the arts organization that plans and produces the annual festival. “I wasn’t lucky enough to meet Howard in person, but his diverse talents and interests have inspired this festival’s personality since the beginning.” 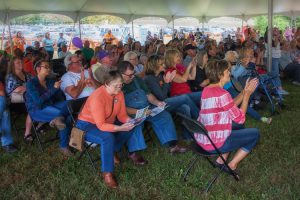 The 2018 line-up features individual sets from Armstrong Legacy Trio—a triumvirate of Howard’s son, bassist Ralphe, plus guitarist Ray Kamalay and fiddler John Reynolds—and festival stalwarts Sparky and Rhonda Rucker. New this year is the inaugural collaboration between the trio and duo.It’s been a dream of mine to see these festival favorites team up for their own set,” says festival Programming Chair Chris Durman. “Considering their shared love of folk standards and the blues, I know their collaboration is going to be unforgettable.”

Acts performing at the indoor Rickard Ridge stage, one of the festival’s most popular additions in recent years, will be announced in the coming weeks.

The festival also includes the Artisans Village featuring a juried selection of high-quality, handcrafted items; a kids’ Fun Zone with physical and artistic activities for young people; a judged art and quilt show; and a food court.