Two pick-up trucks, a small Dodge and a larger one, a Ford, hit square-up head-on this morning just after 11:30 am near the La Follette Medical Center.  First Responders were on the scene in literally seconds and immediately began tending to the injured where South 16th Street meets East Central Avenue.  The driver of the Ford appeared to be suffering non-life threatening injuries while the same cannot be said of the driver of the Dodge.  This update is coming in at 1:58 PM on Tuesday – the driver of the Dodge, a 40-year old male, is reported to be suffering from mulitple fractures and was not airlifted as first reported.  The last information relayed to WLAF was that the patient was taken back to the La Follette Medical Center from the helipad and that Lifestar remains on the pad at ths moment. 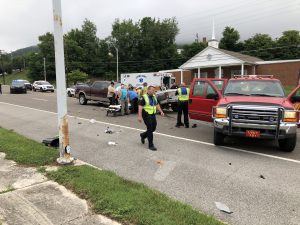 There was a third vehicle involved. The driver of that car, a Ford Taurus, was not injured though the back bumper of his car was ripped loose.  He tells WLAF NEWS that the Ford was traveling toward Middlesboro while the Dodge was La Follette-bound.  He said the Dodge was in the passing lane and then all of a sudden veered into the oncoming passing lane and hit the Ford. 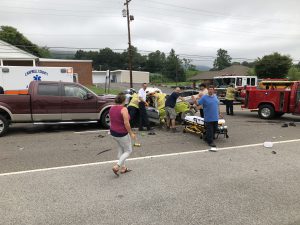 It appeared that the three men were the only people involved in the accident. Traffic was slowed a bit heading into town, but east side travelers were directed down 16th Street to East Beech Street and then back out onto the four lane.  (WLAF NEWS PUBLISHED – 06/26/2018-12:30PM)