John Ward had a close knit connection to La Follette.  His best friend, the late Ed Balloff, lived here.  The legendary broadcaster passed away Wednesday.  Thanks to Ed and my brother Dan, I had a personal line to John.  When I learned of John’s passing, I immediately thought of my brother.

Dan and Ward surprised me with lunch on my 50th birthday.  And Ward bought.  John and Dan drove up in Ward’s pristine Mercedes, and there was no discussion of where we were going to lunch.  John, as only Ward could, said, “We’re going to Frussies!” 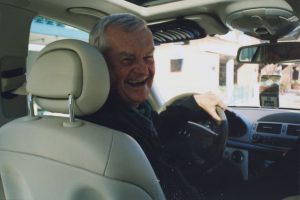 John and Daniel made it a great day and took me by surprise.

That was when Frussies was in south Knoxville; Ward’s old stomping grounds.  We pulled up outback.  Parked that gorgeous car by the dumpster.  And walked in through the backdoor.  Ward was quick to point out that he was Frussies first-ever paying customer.

And if you knew Ward, you knew he was loyal.  He was loyal to Frussies.

What a fun few hours it was.

And about Ward paying.  That was unique in itself.  Because I’d always remembered what Coach Ray Mears told me years ago.  He said, “It’s rare anyone ever gets a meal out of John.  If he pays, it’s pretty special.”