It was La Follette’s best kept secret; a surprise birthday party for J.W. Lee.  Because he was taken totally by surprise.

A couple of hundred of J.W. Lee’s friends and family was on hand around 6 pm Tuesday at the Ball Farm Event Center.  The unsuspecting Lee was told he was being taken to dinner at Oak Ridge to celebrate his 85th birthday.  A little after 6 o’clock, Lee entered the Center to a standing ovation.  The plan worked! 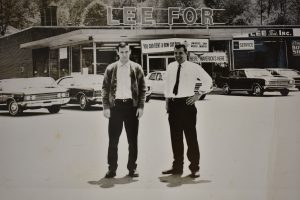 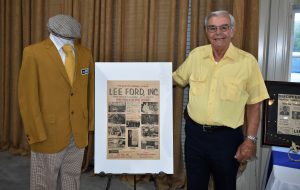 Lots of photos and memorabilia from Lee’s career as the local Ford dealer were on display around the Center.  CLICK HERE to see more Charlie Hutson photos.

Nick Thompson, Lee’s son-in-law, served as the evening’s master of ceremonies.  Thompson said he felt like he needed to tell the audience his name.  He went on to explain that for a long time he was known as Bill Thompson’s boy.  Then J.W. Lee’s son-in-law, and now he’s known as Ann Thompson’s husband.  She is a member of the City of La Follette council.

Some of the biggest laughs of the evening came from accounts about how Nick and Ann met.  Nick also drew lots of laughter when he told of the time he and Stanfield visited J.W.’s farm in Harriman.  Little did Stanfield know that Nick had driven him in one of the first remote starting vehicles made.  As the pair entered the barn, Nick told Mike that it was haunted, and that if the spirits did not approve of your presence, they’d do something to scare you away.  That’s about when Nick remotely started the van scaring Mike out of his skin. 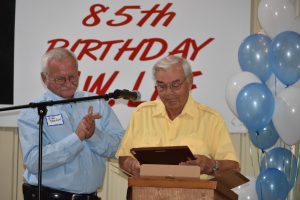