The trio, that stands accused of fraudulent receipt of food assistance, criminal conspiracy, theft and sale of a controlled substance, was indicted earlier this month.

This morning they entered an initial plea of not guilty to the alleged crimes.  The case is set to be back in Judge E. Shayne Sexton’s 8th Judicial District Courtroom on Monday, August 13.

Jimmie Ivey, the alleged owner of the store, weighed in with the most charges with 77 counts. He is the only one facing a narcotics charge. Ivey was indicted for conspiracy to sale marijuana. He also faces 69 counts of theft under $1,000, one count of attempted theft over $1,000, multiple counts of fraudulent receipt of food assistance and a sole count of criminal conspiracy. He faces 72 misdemeanors and five felonies. 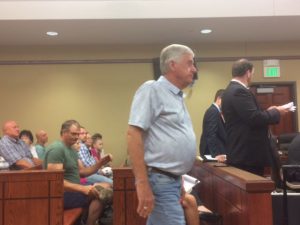 Joe Bolinger, the LaFollette vice mayor, (pictured above) was indicted on four counts of fraudulent receipt of food assistance and one count of criminal conspiracy.  He has two misdemeanors and three felonies to contend with.

Jennifer Brown, an employee and Bolinger’s girlfriend, faces five counts of fraudulent receipt of food assistance and one count of criminal conspiracy, according to the indictment. Of her charges, two are misdemeanors and four are felonies.

When agents raided the business in April they did so under the authority under the Fraudulent Receipt of Food Stamps Assistance law.

Under that law, anyone who uses, or helps someone else use food stamps in any manner except their expressed purpose, can be convicted of a Class E Felony or Class A Misdemeanor. The distinction in the penalties correlates to the amount of the fraud, according to the law. Anything over $100 is a felony while under $100 is a misdemeanor.  (WLAF NEWS PUBLISHED – 06/18/2018-8:50AM)