State Senator Ken Yager (R-Kingston) was recently called upon by the Southern States Energy Board’s Committee on Clean Coal Energy Policies to talk about the Primacy and Reclamation Act which he sponsored in the General Assembly this year.

Yager spoke to the group at their meeting in Kingsport, Tennessee on Monday.   The Primacy and Reclamation Act restores sovereignty over mining and reclamation operations in Tennessee. 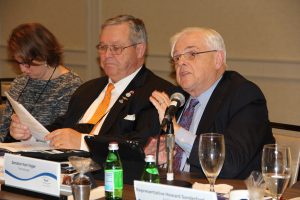 The Southern States Energy Board (SSEB) is an interstate compact, composed of governors and state legislators from sixteen southern states, Puerto Rico and the U.S. Virgin Islands, as well as a presidential appointee.