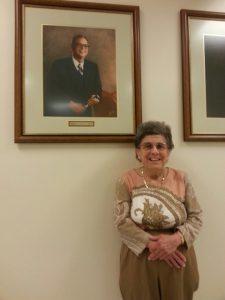 Tiny on size.  But big on everything else; especially her smile.  That might sum Brenda Kitts up in a nutshell.  A real small nutshell. 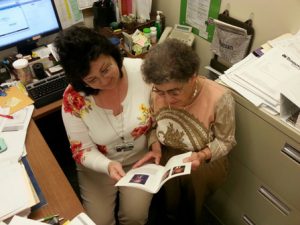 Kitts, along with many other La Follette Medical Center and La Follette Nursing Home personnel, is being honored this afternoon as part of “Medical Center” week at LMC and LNH.  The friendly Kitts, who is barely four and a half-feet tall, stands tall among today’s honorees.  This year marks her 50th year at the hospital.

“Brenda Kitts is a joy. She believes in doing her job and doing well, as importantly she believes in being friendly and kind to everyone around her,” said Mark Cain, CEO of the La Follette Medical Center.

Her career began when Dr. John Pryse, the Kitts family physician, was tending to her papaw in the summer of 1968.  Adron Kitts was in the hospital and told Pryse that Brenda had an interview later that day at the hospital.  Pryse quipped, “What can she do?”  Pappaw Adron shot back, “She can do anything!” 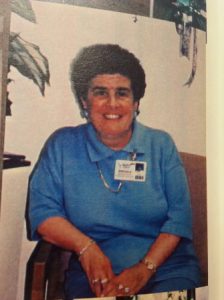 In short time, Doc escorted Brenda to Jane Joslin’s office gave her a glowing recommendation.  Joslin, the director of nursing, hired Kitts on the spot.  “And I’ve been here ever since,” said Kitts.

Bess Stout is the human resources director for LMC and calls Brenda, “One in a million.”

Kitts, a 1966 graduate of Wynn High School, started as a ward clerking at the west nurses station and held that position for 22-years.  There she did all the paperwork and wrote doctors’ orders.  She says, “I like people.  You’ve got to know people and get along with people and do the right thing.”

From the nurses’ station, Kitts moved over to the engineering department where she remained for the next 18-years.  She was the secretary there in an otherwise all-male crew.

It was in 2008 when Brenda moved again.  These days, she’s a cashier for the hospital cafeteria.  She’s quick to say, “I have no intentions of quitting.”

The active 70-year old calls La Follette Medical Center “home.”  She notes, “This is a great place for me, and I’ve enjoyed it thoroughly.  She adds that everyone, especially the doctors, have been so great.”  And she’s worked closely with the doctors.

Kitts has seen a lot of changes in her 50-years.  The building of the nursing home, a complete change to the emergency room, a bigger lab.  The list goes on.

From 2 pm to 4 pm today, the public is invited to the hospital’s annual service awards reception.  That’s in the hospital dining room.  Here’s a complete list of the others who will be recognized today along with Kitts.