JACKSBORO, TN (WLAF) – This is from the WLAF archives as we remember Memorial Day 2018.

“I’m 88 going on a hundred,” Jack Reynolds said with a chuckle.  The US Army veteran was one of many that attended Monday’s Memorial Day ceremony on the side lawn of the Campbell County Court House at Jacksboro.

He adds that I’ve made most of these, but I’ve missed a few recently. 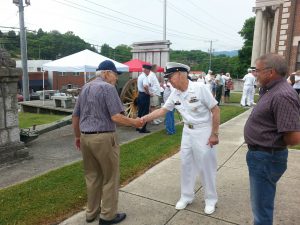 There was a better than usual turnout for Monday’s Memorial Day ceremony.

Reynolds recalls working at Peoples National Bank, now Peoples Bank of the South, in the summer of 1950 when Joe Rogers, who headed up the local draft board in those days, stopped by the bank.  He told the recent college graduate that if he didn’t enlist, he’d have to draft him.  Reynolds told him, “Then you’ll have to draft me.”  He said it wasn’t much after that that Rogers sent him a greeting (draft notice) in the mail.

Reynolds (L) was welcomed and thanked for his service from some of the younger veterans.  Danny McCulley, shaking hands with Reynolds, served in the US Army and is a Vietnam veteran.  McCulley is also a member of the Campbell County Honor Guard.

After 16-weeks of basic training at Fort Jackson at Columbia, South Carolina, Reynolds was sent directly to Panama in the spring of 1952.  He was with the amphibious engineers and spent a good stint in the Panama Canal Zone.  He was also stationed at Goose Bay located in the province of Newfoundland and Labrador. 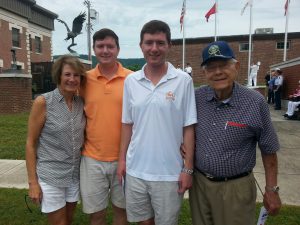 During his tour of duty, 1951-53, the La Follette native ran into only one other person from home.  It was at Fort Sherman – Panama when he saw Jack Davenport at the PX.  “He was with the airborne division and was there for jungle training,” Reynolds said.

When Veterans Day rolls around in November, Reynolds will be a little closer to 100.  He’ll turn 89 that month.