LAFOLLETTE, TN. (WLAF) – Jeff Courtney committed a monstrous crime- he raped a woman.   There is a bone chilling recording to back up the woman’s claim. On the less than five minute audio track, she can be heard begging him to stop while he verbally abuses her and clearly violates her.  His language is graphic and cruel.  Her sobs echo in the recording.   To her credit, the victim had had enough negative encounters with Courtney to start recording any interactions the two had.
Days after the assault, Courtney left voicemails and texts apologizing for his actions.
Yet, despite this damming evidence, Courtney left court last week pleading guilty to only one count of false imprisonment not the two counts of rape he was indicted for.
Courtney, who had a prior conviction for domestic violence and at one time was a police officer, had an understanding of the judicial system. As an officer, he would have known witness testimony was crucial to a conviction. In fact, witness testimony, the same witness in the rape case, is what helped to convict him of a prior domestic violence charge. For this conviction, his clean background earned him probation and judicial diversion.
After Courtney was arrested for rape in August, the victim asked Eighth Judicial Assistant District Attorney General David Pollard to drop the charges. By this time, Pollard knew the evidence and was “flabbergasted” with the request.
He had been down this road before and felt the victim needed reassurance that moving forward with prosecution was the right move. The victim said she asked the district attorney’s office for help; she was afraid and unable to cope with what had happened to her.
When she met with the district attorney’s staff, it was in hopes of having the case delayed so she could attend therapy, she said. Instead, she was told the case was moving forward.  It left her feeling disheartened and alone.  “I felt like when I didn’t want to, when I couldn’t, testify, they abandoned me,” she said.
When someone is arrested, authorities have 14 days to hold a preliminary hearing.  “When the victim was asking for the delay her request came in that two week time span,” Pollard said.
“I did not have the luxury of calling a time-out,” he said. And while delaying the case at that juncture wasn’t an option, the victim was offered trauma literature and offered a referral for counseling services, which she refused, according to Pollard.
Had she later attended therapy and the therapist agreed that testifying would be too traumatic Pollard would have honored that, he said.
By the time the preliminary hearing came, Pollard had lost his witness, which meant he had lost traction in getting the audio from the rape admitted. No matter how he appealed to the victim, she didn’t cooperate.
For the victim, her hesitation to testify wasn’t born of obstinance. Instead, fear of retaliation and slut shaming were stopping her.   She said the rape had been traumatic enough but Courtney had begun using family members against her. He convinced the victim’s family he was remorseful, used Christianity as a prop and tried to alienate the victim from those closest to her.
From inside the jail, Courtney called the victim allegedly telling her no one would believe her. Along the way he also offered a few apologies, the victim said. In fact, the day after the rape, he texted her saying her “I am so sorry for everything,” according to information obtained by WLAF.
The district attorney’s office was not informed by the victim Courtney was harassing her, Pollard said. When questioned if Courtney was trying to interfere with his prosecution the victim denied he was, according to Pollard. 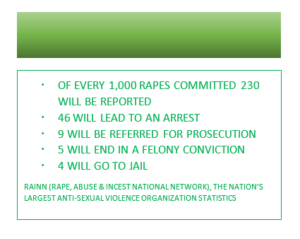 In most abuse cases, a perpetrator often uses intimidation and manipulation to stop his own prosecution.
It is a staggering thought- a person accused of rape would continue the pattern of assault by frightening the witness. Yet, numbers show that rape convictions are difficult to obtain.
Perpetrators of sexual violence are less likely to go to jail or prison than other criminals, according to RAINN (Rape, Abuse & Incest National Network), the nation’s largest anti-sexual violence organization.
With every 1,000 rapes committed 230 will be reported; 46 will lead to an arrest; nine will be referred for prosecution; five will end in a felony conviction and only four rapist out of 1,000 will go to jail.
For assault cases, 33 of every 1,000 assault cases, RAINN statistics said.
Women who have been in abusive relationships often fall into learned helplessness, according to the Center for Disease Control. They often believe the abuser is all powerful and can’t be stopped.
“Courtney and his victim had a long history that involved multiple 911 calls that usually ended with Courtney convincing the police the female had been the aggressor,” Pollard said. The victim agreed this was the course during her relationship with Courtney. She recalled one instance where he allegedly beat her, she called the police and Courtney allegedly ended up smoking on the front porch with the officers before they left without filing a report. This became standard, she said.
This role reversal is also common in domestic violence cases where the accused blames the victim, according to Psychology Today.
In working with the local district attorney’s office, the victim was offered support, Pollard said. In fact, he believed that when she testified in the prior domestic violence case it had embolden her. But as the new case moved forward, the victim recanted and refused to testify.
Pollard insisted he was working with the barest of evidence after losing his witness and the audio, but was “determined that Courtney would lose his judicial diversion and become a convicted felon.”
Courtney had been placed on five years judicial diversion following the domestic violence conviction. Judicial diversion meant if he managed to avoid further charges then at the end of the five years, his record could be wiped clean. A felony conviction would negate his diversion.
As the case made its way through Campbell County’s criminal system, the victim still refused to testify. When Pollard mentioned a material witness warrant in a letter to the  victim  it was only to draw a response, he said. By this time, she had an attorney, one  that Courtney had paid for her, according to the victim.                                                      Pollard wanted to prosecute this case.
The victim wanted it to go away.
For Pollard this case highlighted what a prosecutor believed to be true and what a prosecutor can prove to a jury.
Even as Courtney’s court date closed in, the victim was still trying to rebuild her life, she said. Producing text messages from October, the victim said she told police she “wanted to tell the truth” and asked to testify. Five days later, and after not getting a response from the officer, she sent another text, which doesn’t appear to have been responded to.
The morning of Courtney’s plea the victim texted Pollard.
She told Pollard he was “right and knew the truth.” Recounting the fear she had grappled with the victim conveyed “feeling sick” she had “muddied the waters,” according to the texts provided by both parties.
The “highly unusual circumstances of this case” shouldn’t discourage other victims from coming forward, Pollard said.
What made this case unusual was the victim and Courtney didn’t live together, she didn’t need his financial support and she worked with the district attorney’s office in the past to prosecute Courtney, Pollard said.
Even though the victim and Courtney don’t live together the aftermath of the rape still affects her life. She has anxiety, problems sleeping and suffers from Post-Traumatic Stress Disorder, she said. None of these problems is out of the ordinary for rape victims. They often suffer these problems along with guilt, a general distrust of people, anger and feeling a loss of power, according to the CDC.
Pollard said despite his efforts to have the victim testify in hopes she would regain some sense of power, she wouldn’t. When it became clear he couldn’t count on her testimony, he changed his focus to ensuring Courtney’s diversion was pulled.  This meant communicating the false imprisonment conviction to the victim through her attorney, which he did.
Emails provided to WLAF show the victim’s attorney consenting to the plea on behalf of his client.  It is a decision she regrets.
“In hindsight…. I wish had done things differently,” she said.  (WLAF NEWS PUBLISHED 11/21/19 6AM)