Lansden Hill and Pyro Shows have come a long way since Hill shot his first paid fireworks show in 1969.  It was a $36 payday from a fireworks show Hill did at the annual shirt factory picnic that had him thinking there may be potential with shooting fireworks especially compared to mowing yards at $3 a clip.

Fast forward to Feb. 19, 2019, the 50th day of the New Year.  Yesterday, on that 50th day of the 50th year, Pyro Shows and the community celebrated the milestone.  It took place outside on the parking lot and inside the Pyro Shows offices located on the former Shelby’s Grocery store property.

TOP PHOTO:  Lansden Hill, red shirt in kneeling in front, and the Pyro Shows staff gathered for a group photo at Tuesday’s celebration.

After a couple of different company names, the name, Pyro Shows came about in the early 1980s and stuck.  The company has grown from a one phone line operation at Hill’s EE Hill and Son Insurance business to several phone lines at the new location that is totally dedicated to fireworks.

Hill shared with the large crowd his philosophy for leading the company has been “Alone I can do nothing.  Together, we can do anything.”  He thanked everyone for the love and support shown from everyone in Campbell County.

“My father taught me three important things about business and life,” he said.  “There is no profit made until after everyone is paid.  Everything has a place and needs to be in its place.  Treat others well, and it will turn out fine.” 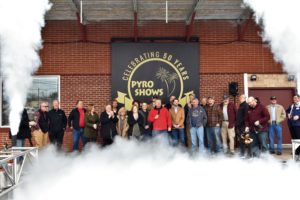 Pyro Shows Vice-President Mike Walden explained to the crowd how as a chemistry teacher at Campbell County High School he became associated with Pyro Shows with a suggestion from CCHS Advisor Ken Owens in 1992.  Walden expressed his appreciation to Hill for the opportunity.

Garrett Hill, Hill’s son, represents the second generation of Pyro Shows.  He told the crowd he hoped to be here 50 years from now to celebrate Pyro Shows 100th anniversary.

Pyro Shows shoots 1,200 shows a year and has shot fireworks shows in just about every corner of the world.  While the company has had several shows of note, it has had the honor to provide the 4th of July fireworks at the Washington Monument in Washington, D.C. for 13 times since 1995.  That’s proof enough that there just might be some potential with this. (WLAF NEWS PUBLISHED – 02/20/2019-6AM-PHOTOS COURTESY OF WLAF’S CHARLIE HUTSON)