When Gale Hinton drives down Central Ave. in La Follette she always glances at the turn for her grandparents house.  It was here in Campbell County she learned to love the country life through milking cows and playing in the great outdoors,  and it was maybe even where she saw her first ant.

If you have connected to WLAF this week, you are already familiar with Hinton, the nearly lifelong artist, who lent her talents to an area school recently.

TOP PHOTO:  One of Valley View School’s very own ants.

Hinton brought the walls at Valley View Elementary School to life with her artistic creations that includes cows and even ants.

Now.  About those ants.

It was 1993, and Hinton was 25 years into her art career, when she put her creative touches around a Knoxville business that was just starting up.  A year  later, she returned to the business to work again.  But since her first time there, the young owner had died leaving behind his wife and children to manage the business.

The project consisted of a six to seven hour stretch of painting with one of the little boys intermittently hovering around not responding to any of Gale’s questions.  Once into a forest scene including waterfalls, streams and rocks, she was caught off guard when he walked to the stream and asked if she would paint a bug on a boogie board going over the waterfalls.  She quickly narrowed it down to an ant.

Soon the first ant on the boogie board was joined by a few more ants.  The boy quickly brought his mother over to show her “my ants,” saying “Miss Gale did these for me.”

And that’s where the ant art began. 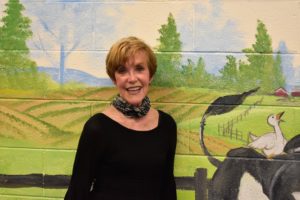 Gale Hinton’s grandparents lived in La Follette when she was a child.

-At a hospital, a young make patient, walked up very close to Hinton as she painted.  He soon pointed at an ant and said “This is beautiful.”  His mother who was nearby screamed at hearing his words.  She said it was the first time the autistic six-year-old had ever spoken a word outside of his home.

-There were 10 children going through chemotherapy on one wing of a Chattanooga hospital while Hinton was painting in the area.  She told them each was going to have their own ant on the wall.  From playing a piano to fishing to sitting on a tractor, each ant had its own identity for each child.

-A boy named Josh said his grandfather had a John Deere Tractor, and he wanted his ant on a John Deere.  So, the 10th ant, Josh’s, sat on the green John Deere. A year later, Hinton received a phone call from a woman who asked if she remembered painting an ant on a tractor.  She instantly said, “Yes, for Josh.  How’s he doing?”  His mom quietly said he died not long after Hinton had painted his ant.  The mother went on to say she visited the hospital every month to see Josh’s ant on the John Deere.

Thank you, Gale, for sharing your talents, time and special stories with us.  It means a lot knowing that La Follette and Campbell County have a special place in your heart.  (WLAF NEWS PUBLISHED – 01/11/2019-6AM-PHOTOS COURTESY OF WLAF’S CHARLIE HUTSON)